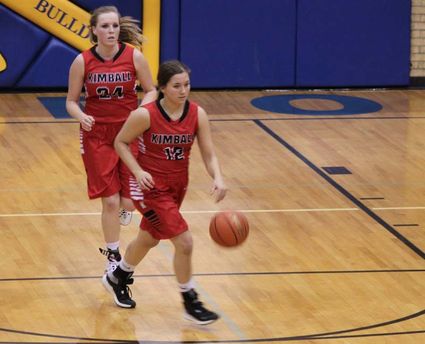 Kimball's Jessica Hanks, right, brings the ball up the court during last week's game against Bridgeport in the sub-district playoffs, as Danika Daum follows her. The Lady Longhorns topped Bridgeport but lost to Hemingford to end the season.

Kimball's Lady Longhorns took care of business in winning their first round sub-district tournament pairing with Bridgeport, coming out on top 47-33, and almost pulled the upset of the season in a 49-43 loss to top seed and state ranked Hemingford in the championship game.

In first round play, the number 2 seeded Kimball club opened up with 4 treys in the first quarter with Danika Daum hitting the first shot of the game from beyond the arc after taking a pass from Madison Biesecker who had 3 first quarter assists. Biesecker also contributed a trey and Alex Reader swished a pair of 3 pointe...