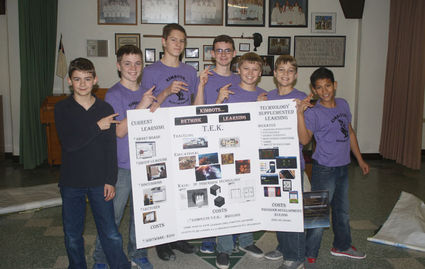 The Kimbots 4-H robotics team qualified for the Nebraska Lego League Championship that will be held Saturday at the Strategic Air and Space Museum in Ashland. The seven-member team was one of the top two teams at a qualifying meet held in Sidney in order to qualify for state. Pictured, from left, are team members Timothy Mars, Todd Hunsaker, Stephen Bateman, Nate Mars, Ethan Bemis, Scott Hunsaker and Patrick Bruner. Not pictured: co-coaches Andrea Bemis and Wade Brashear.

The Kimbots are headed to state.

The Kimball Robotics Club, also known as the Kimbots, will compete in the First Lego League State Championships Saturday at the Strategic Air and Space Museum in Ashland. They are one of 45 teams throughout the state to qualify, and did so at a meet earlier this year in Sidney.

In just the program's second year, the seven-member group scored enough points in four categories to beat 16 other teams and qualify for state. The top two teams in the 4-H sponsored meet at Sidney qualified for state.

Teams from around the state have roughly 10 weeks to prepare for...