Friends and Neighbors: Perry-Jay has lived the full life in Kimball 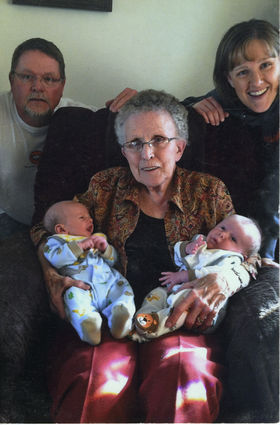 Louise M. Perry-Jay is shown in this family photo of four generations. Pictured is her son, Dan Perry, at left, granddaughter Amber Burson, at right, while Louise holds her great-grandchildren, Declon and Loc Burson when they were newborns. The twins are now 2 years old.

Kimball has a long history, and it would not have that history if it was not for the residents that choose to call it home. One of Kimball's longtime residents is Louise M. Perry-Jay, a mother, grandmother, great-grandmother, cosmetologist, Avon lady, and all-around hard worker.

Louise M. Perry-Jay was six months old in 1926 when she moved with her parents, John C. and Anna F. Schadegg, to live on a farm just northwest Kimball. Louise grew up on the farm with her two sisters and her brother.

"Kimball was much different back when I was growing up and going to school. When I started high sc...