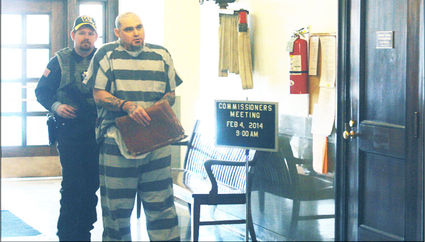 Vencil Ash is led out of the Kimball County Courthouse after a status hearing on Feb. 6, 2014. A jury on Monday declared Ash guilty of first degree murder of Ryan Guitron in 2003.

Monday's verdict ended the weeklong trial. Ash will return to court early next month for sentencing.

The end of Monday's trial marks the second time Ash has been found guilty in the case. He was found guilty of Guitron's murder by a jury in July 2012. However, the Nebraska Supreme Court overturned the ruling in October 2013, stating that the defense did not have proper time to prepare for Ash's wife, Kelly Meehan-Ash, to take the stand. The Supreme Court stated that Ash's requests to postpone the trial in order to prepare a defense against the testimony should have been granted.

In the trial that ended Monday, there were two stories presented on what happened the day of Guitron's death. There was the testimony offered by the defendant's wife, Kelly Meehan-Ash, who was then his girlfriend, and she said Ash committed the murder. Then there is the story from Ash, who claimed that Meehan-Ash shot Guitron.

Meehan-Ash testified that Ash created a ruse to lure Guitron to an abandoned farm in Kimball County, south of Bushnell, in order to murder him. She said he did so after having found a bag in Guitron's room containing pornographic items and Meehan-Ash's under garments. Meehan-Ash testified that Ash was angry and had made the statement, "I'm going to kill him," upon finding the items in the bag. Meehan-Ash then recalled Ash talking about taking Guitron somewhere to kill him.

On Oct. 15, 2003, Ash claimed that he knew where to get items in order to make methamphetamine. He convinced Guitron to drive to this location, and Meehan-Ash traveled with them as the three of them set off to get ingredients. Roughly halfway through the drive, Ash started driving, and the three ended up at the abandoned farmstead in Kimball County. The three wandered around the farm. They found some old items piled up, among them a baby bed frame. Ash instructed Meehan-Ash to carry the baby bed frame to the car, because he wanted to make something out of the old frame. She testified that as she reached the car with the baby bed frame, she heard a gunshot. She looked back up to where she had left Guitron and Ash, and Guitron was on the ground bleeding from his neck and Ash was standing over the body holding his .380 pistol.

Meehan-Ash testified that she looked and then continued to the car. She said she was high on methamphetamine at the time and described her perception of things being "real, but not real, like a dream." She constitutes her lack of reaction to seeing Guitron dead to her being high.

Meehan-Ash testified that Ash then returned to the car and retrieved a pair of black gloves, and said he had to bury Guitron. She said that after this, Ash drove Guitron's Mercury Topaz car to an oil rig where he traded several of the car's contents, including drugs, and made arrangements for the trade of the car itself. It was what seemed like the next day to Meehan-Ash that she and Ash went to the home of Jesus Campos, and there Ash made a deal with Campos to trade Guitron's Topaz and two pounds of methamphetamine for Campos' Cadillac Escalade.

Ash and Meehan-Ash then transferred the items that were in the Topaz to the Cadillac and then went on their way. They went to Kersey, Colo., to visit Ash's brother, who was not there. A few trailers down from his brother's residence, Ash was arrested on Oct. 18, 2003.

Meehan-Ash stayed at Ash's brother's home and waited for Connie Ash, his sister, to come pick her up. Meehan-Ash was then taken to Grover, Colo., where she was later arrested for being a juvenile runaway.

Meehan-Ash came forward in 2010 and told the police her recollections of that day. The Bureau of Alcohol, Tobacco, Firearms and Explosives (ATF) officers that were working with Meehan-Ash tried to find the abandoned farm she spoke of on a few occasions, but she could never point out the location, even when she was driven out to the area to look around.

It was not until investigators Robert Coleman and Kevin Maul of the Larimer County (Colo.) Sheriff's Office interviewed Ash while he was incarcerated that the abandoned farmstead was found. Coleman, a seasoned investigator who had been in law enforcement since 1978, used several techniques to get the information he needed out of Ash that day. He used a technique that involved creating themes that could provide a sort of justification for the act in the mind of Ash. There are a few themes that Coleman worked with while interrogating Ash. He tried blaming the victim, where he made Guitron out to be the "bad guy" in order to allow Ash to justify his actions as acceptable. He used the theme of needing to protect Meehan-Ash from Ryan, who may or may not have been preying on the girl. This type of scenario allowed Ash to make himself to feel that he acted as the protector of Meehan-Ash.

Ash eventually spun his own version of the story in which Guitron was brandishing a .22 shotgun and aimed it at Meehan-Ash. Ash claims to have knocked the gun down and then, in the first version of his story, he shot Guitron with the .22. Upon questioning of the plausibility of that scenario, Ash switched his story to having shot Guitron with the .380 he had tucked into the small of his back. In his testimony version of the story in the 2012 trial, which was read in the recently finished trial, Ash said he knocked down the .22 and struggled with Guitron until Meehan-Ash ran up carrying the .380 and shot Guitron twice. Ash claims to have been protecting Meehan-Ash all the times he lied about the events of Oct. 15, 2003.

After Ash gave up that he had shot Guitron because he thought Guitron was going to hurt Meehan-Ash, he offered to take the officers to the abandoned farm where the events took place. Later that day, Ash took the officers there directly without second guessing himself at all.

Investigator Brian Eads with the Nebraska State Patrol arrived to the scene and searched the area. Guitron's Oakland Raiders football cap, his watch and ring were found at the scene. The investigators found Guitron's shoes spread around the scene and two .22 shells. Guitron's skeletal remains were found hidden in the wood pile that rested on the property. The skeleton still had remnants of clothing still on it, which appeared to be jeans and a T-shirt.

The remains were sent to Dr. Peter Schilke, a pathologist who works out of Scottsbluff and consults as a forensic pathologist. Dr. Schilke examined the remains of Guitron and determined that the cause of death was a gunshot wound to the eye socket. The bullet was lodged in the skull and was recovered by Dr. Schilke.

Dr. Schilke was still undecided about the manner of death and did not feel that he could accurately determine whether or not it was suicide or homicide. He sent the remains to Dr. William Rodriguez, a forensic anthropologist. Forensic anthropologists are known for their vast knowledge of the human skeleton, and Dr. Schilke believed that if anyone could determine the manner of death, it would be Dr. Rodriguez.

What Dr. Rodriguez discovered was a second gunshot wound. From examining the bones, Dr. Rodriguez noted that a bullet had entered on Guitron's right side, struck the first cervical vertebrae, obliterated that bone and exited the left side. The first cervical vertebrae is the bone directly at the base of the skull and serves as a sort of protection for the spinal cord. After discovering this gunshot wound, along with the shot to the eye, Dr. Rodriguez felt comfortable ruling Guitron's death a homicide.

The prosecution brought T. Daniel Gillam, a firearm and tool marks examiner, to the stand. Gillam proceeded to explain how he examines the lands and grooves on the bullet to determine from which gun it was fired.

Every gun barrel had lands and grooves on the inside that give the bullet a spin so that it will travel further, much like the way a quarterback spins a football when he throws it to get more distance. The lands and grooves on the inside of a barrel are unique to each gun and act as a finger print, allowing an examiner to identify which gun a specific round was fired from. Gillam identified the .380 that belonged to Ash as the gun from which the round found lodged in Guitron's skull came from.

Ash never testified in the trial that ended Monday. The prosecution read the transcript of his last testimony aloud so that it would be on the current trial's record. Within that testimony Ash claimed that the discrepancies in his version of the story were because he was trying to protect Meehan-Ash, since according to the most recent version of his story, she was the one who shot Guitron.

It was also asked of Ash, why he decided to tell the truth now, instead of continuing to protect Meehan-Ash.

"It's because of my puppy. In Scottsbluff I had a puppy and it died, and I was just thinking about that puppy and how I needed to tell the truth," Ash said.

The defense attempted to explain what Ash meant by his dead puppy making him want to tell the truth, in its closing arguments. The defense explained that Ash had been working with a program where inmates care for rescued animals as a part of therapy and rehabilitation. The defense claimed that Ash's heart and point of view was changed by his time spent caring for this puppy that died.

Ash also convinced Meehan-Ash to marry him, because it was his understanding that his wife's testimony could not be used against him in court. So while incarcerated, Ash convinced and directed Meehan-Ash to file and complete paperwork that would make them legally married. In the recorded phone conversations between Meehan-Ash and Ash, he also instructed her to not go to court if she was subpoenaed, and to simply say she did not remember anything and that she was down at the car at the time of Guitron's death.

With four days worth of witness testimony and evidence the jury was excused to deliberate at 5 p.m. Monday. After two hours and 15 minutes, the jury reached the guilty verdict. They found him guilty on one count of first degree murder. Ash will return in a month's time for sentencing.