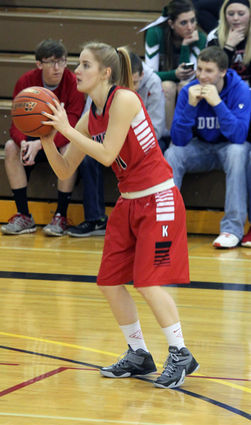 Kimball's Kailey Dickerson prepares to take a shot during SPVA tournament play. The Lady Longhorns finished fourth in the tournament.

After winning 49-31 over Maxwell in first round play of the SPVA tournament as reported last week, the Kimball High girls suffered two defeats in play at the North Platte Community College, and ended up 4th in the 8 school bracket.

The number two seeded Lady Longhorns lost to number three seed Chase County, a team they had defeated on the road just a couple of weeks back, 42-35, on Friday night with the ladies from Imperial winning out 52-41 to advance them into the championship game, while Kimball dropped down in the losers bracket to battle Sutherland for consolation honors where they su...