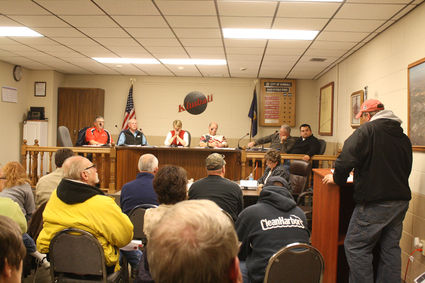 More than 30 people showed up to the Dec. 23 Kimball board of public works meeting, mainly to discuss the landlord agreement. That item was tabled.

The Kimball board of public works discussed the city's landfill, electricity and a landlord agreement at the Dec. 23 meeting. The room was packed with over 30 people present due to certain agenda items.

There was discussion concerning whether or not the board should allow the landfill to accept trash from a company outside of Kimball County. If this were to be something considered then the board would also have to set the rates for the service.

"Is there a way to monitor what they're dumping to make sure they aren't sticking us with some sort of contaminated trash?," board member Greg Robinson, asked.

Kimball City Administrator Daniel Ortiz answered that the crew does not go through the trash being brought to the landfill. They will ask what it is and then lead those dumping to the appropriate pit. However, that does not mean that the landfill employees dig through the garbage they receive. This means it would be entirely possible for those with larger loads to possibly sneak something by that could be difficult to dispose of otherwise.

"I don't want someone sticking us with hazardous waste and then us having to pay the price to clean something up," Jim Merryfield said.

The other issue brought to the forefront was that the landfill does not have a scale. They charge by yard when it comes to dumping. This is one of the reasons the Kimball Landfill is sought out, because it is cheaper since the charge is not by the pound.

The board decided to table this item until January, and requested Ortiz to gather more information regarding the arrangements that could be made to protect the landfill and the city in the case the city was being stuck with waste they should not have.

Ortiz then came forth to discuss the changes in utility rates due to the financial irresponsibility of Municipal Energy Agency of Nebraska (MEAN). MEAN is projecting a $4.4 million shortfall. MEAN operates under a break even budget, and fluctuations in the utility prices hurt them significantly. Since the cheapest power sells first, MEAN is not always able to sell its energy due to their higher prices.

"Due to MEAN's financial situation we can probably see a rate increase of about eight to 10 percent," Ortiz said.

In the past, MEAN focused on keeping rates low rather than saving for the future if they ended up in a financial predicament. Unfortunately, this means that the rates are going way up as a result of the attempt to keep the rates low for that long.

The idea of leaving MEAN's service was brought up due to speculation from the public in the past. However, Kimball is locked into a contract with MEAN until 2036.

"We have to face the fact that unless Kimball grows, we have to increase rates," board member Dawn Moeser said.

The board instructed Ortiz to find out what it would cost to have utility rate studies done by a company not affiliated with MEAN in order to obtain as much information as possible to be able to make the most informed decision.

The next item up for discussion was to consider amending the Landlord Utility Agreement. Several Kimball landlords were in attendance to discuss the agreement. Although at first it seemed that several were confused.

"I just want to ask for clarification. You are asking if we would like changes to be made to notify us before a tenant becomes delinquent on their utilities," said Chad Miller, a Kimball landlord.

The agenda stated considering action on amending the agreement. However, several in attendance were under the impression that it had already been amended. After that issue was then cleared up, the landlords still stepped forward to offer potential ideas for what needed to be amended.

"I filled out paper work with the city and I was under the impression that I would be hearing back. However, I never heard a word. I just feel that if you are going to go through the trouble of having us fill out things and then tell us we'll hear from you, you should make an effort to contact us," said Cathy Sibal, a Kimball landlord.

The board instructed Ortiz to look into changing the agreement to reflect the concerns of the public present. Once a draft is drawn, a public hearing will be held to discuss changes to the draft.