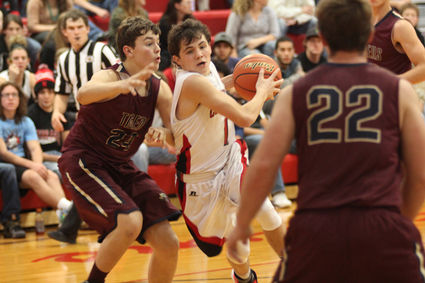 Kimball's Jordan Greenwood drives to the basket during a game over the weekend in the Kimball tournament. The Longhorns claimed the tournament title with wins over Dundy County-Stratton and Morrill.

The Kimball High boys opened the season with a pair of wins in capturing the championship of their own four team tournament this past weekend as new head coach Luke Dea saw his new role as the head man start off in the right way. The Longhorns won over Dundy County-Stratton 58-56 in first round play and took out Morrill 61-53 in the championship contest.

The game with Dundy County-Stratton was a rough and tumble affair with 44 fouls called (26 on DCS) with Kimball making runs that gave them comfortable leads only to see the visitors come back each time to secure the win in the closing seco...