Longhorns fall to Scottsbluff in Hall of Fame game 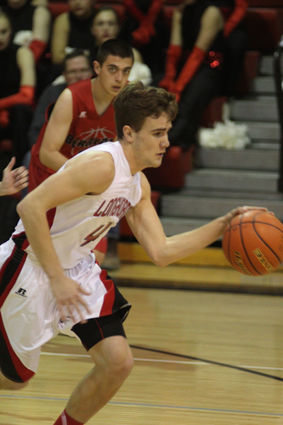 Trent Rutledge leads the Longhorns up the floor in Monday's Hall of Fame Game in Scottsbluff. They fell behind early and lost, 76-38.

The Kimball High boys were simply out classed by a much larger and talented Scottsbluff team in the Nebraska School Hall of Fame pre-season game Monday evening at Scottsbluff High School and came up on the losing side of the final score of 76-38. In all reality, they may have been facing this year's eventual state Class B champions as the Bluffs squad is loaded with talent and have a couple of starters over 6'6" to take care of things inside.

That being said, there were some positive things for new head coach Luke Dea and his staff to mull over as they prepare for this weekend's Kimball To...