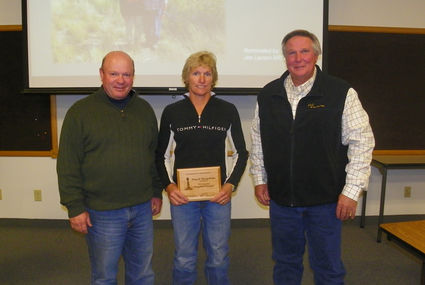 Doug and Theresa Keller of Kimball were recognized with the SPNRD 2014 Rangeland Manager award, sponsored by Frenchman Valley Coop and presented by Mike Isely (right). The award is given to those individuals who show good stewardship in grassland use.

Top stewards have been recognized for their continuing efforts in three areas by the South Platte Natural Resources District.

Sprenger Farms of Sidney, Steve Schumacher from Dalton and Kimball area ranchers Doug and Theresa Keller received awards for their farming, tree planting and grassland achievements. The awards were presented at a ceremony and reception prior to the District's November board meeting.

Doug and Theresa Keller own and operate a registered Angus herd west of Kimball. Their operations consist of approximately three section of grassland along with some ir...