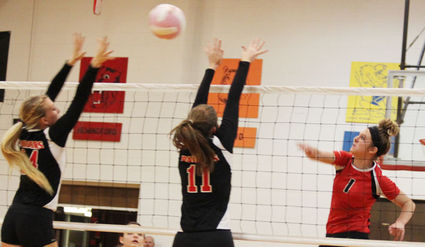 Madison Biesecker, right, goes on the attack in a match last week against Sidney. The Lady Longhorns' season ended Monday night with a loss in the sub-district finals to Bridgeport.

The season came to an end for the Kimball High Volleyball Team on Monday evening with the Lady Longhorns losing in 3 sets to Bridgeport in the sub-district championship match.