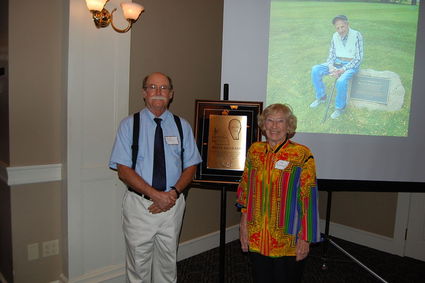 Son Steven and wife Wilma stand next to the plaque they accepted on behalf of their father and husband Bruce Gilliland at this past Monday night's induction into the Nebraska Golf Hall of Fame held at the Country Club of Lincoln. In the back ground on a screen was the picture of Bruce as he relaxed by sitting on a memorial stone at the Four Winds Golf Course that also recognized the many contributions to the game of golf in Kimball. Bruce did not make the trip as he was not feeling up to it at age 97 and after battling cancer the past few years.

Kimball's Bruce Gilliland was inducted into the Nebraska Golf Hall of Fame this past Monday evening in ceremonies held at the Country Club of Lincoln in Lincoln, Nebraska. Bruce, who turned age 97 just three days earlier, was not up to making the trip but was represented by his wife Wilma and son Steven who accepted the honor in his behalf. Wilma is familiar with the procedure as she was inducted back in 1993. Others on hand with Kimball ties included Mike and Denise Nelson, with Mike speaking in behalf of Bruce, and Jodi, Lindsey, and Grant Keeler, Lynn Smith and Con Good.