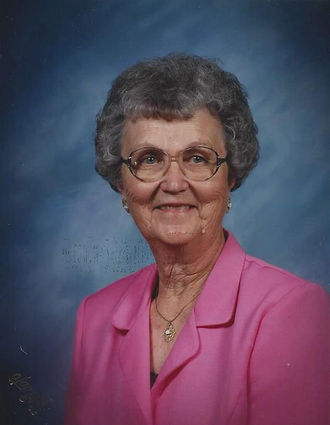 Irene J. Nelson, 87, of Bushnell, died at Kimball Health Services on Wednesday, Aug. 27, 2014.   Memorial services will be held at 2 p.m. on Tuesday, Sept. 2, 2014 at Trinity United Methodist Church in Kimball with Pastor Carla Gunn officiating.  Inurnment will be held in the Kimball Cemetery.  Friends may call at the funeral home on Monday from 1 p.m. until 4 p.m. to leave condolences for the family and sign Irene's register book.  Friends may also visit http://www.cantrellfh.com to leave condolences for the family and view Irene's Tribute Wall.  Memorials may be given to Calvary United Methodist Church or the Family.  The services for Irene have been entrusted to the Cantrell Funeral Home in Kimball.

Irene Janet Nelson was born in Kimball on Dec. 9, 1926, the daughter of James and Helen (Herman) Vavra.  She was raised in rural Kimball County and attended Sunshine Valley School District #20.  She then attended Kimball County High School and graduated in 1944.  Irene's career of working for the Kimball County Clerk's Office began before she graduated from high school.  She retired after more than 30 years of service.  Irene was married to Leland Nelson on April 6, 1947 at Trinity United Methodist Church in Kimball. They farmed in the Newman Grove area for five years while raising their first two children, Janet and Carolyn. In 1952, they moved to Kimball County, Nebraska to the farm that they still call home today. During the 1950's, they continued to grow their family by adding four more children; Nancy, Vicki, Jeffrey, and Patricia.  Irene was involved in many activities outside of the home, including sewing, 4-H, the Red Hatters, Moon Beam Extension Club, and serving as treasurer of the Calvary United Methodist Church.  The thing she loved the most were her family and working with Leland on the family farm.  She helped with whatever needed done, and was known as the lead truck driver.  She was a wonderful baker. Her family loved her brownies and sticky rolls, and she always had a pan full when family and friends were going to be coming for a visit.  During Christmas she would make a braided cinnamon roll for all of the businesses in Kimball, this was done to show her appreciation for the help that they provided to the people of Kimball.  She was also a Nebraska Cornhuskers and Denver Broncos fan.