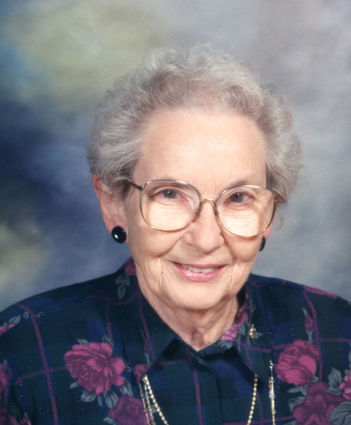 Anna Margaret Petersen, 94, of Kimball, died at the Kimball County Manor on March 28, 2014. Cremation has been held and memorial services will be held at 10:00 a.m. on Monday, June 9, 2014 at the Trinity United Methodist Church in Kimball with Pastor Carla Gunn officiating. Inurnment will be held in the Kimball Cemetery. Friends may visit http://www.cantrellfh.com to view the obituary and leave condolences for the family. Memorials may be given to the family. The services for Anna Margaret have been entrusted to the Cantrell Funeral Home.

Anna Margaret Petersen was born in Cheyenne, Wyoming on November 19, 1919, the daughter of Oscar and Ruby (Neely) Linn. She lived with her family in Kimball and graduated from the Kimball County High School in 1937. She attended nursing school in Grand Island and graduated in 1943. Anna Margaret was married to Henry R. Petersen in Norton, Kansas on December 27, 1943. She moved back to Kimball and worked at the McGinnis Hospital and later Kimball Health Services for 44 years. She retired in 1988 but still volunteered her time at the hospital for another 17 years. She received the Kimball Volunteer of the Year Award for her many years of service to the Kimball Hospital.

Survivors include her children David Petersen of Tulsa, OK., Judy (Raymond) Seeman of Troy, MT., Doug (Pam) Petersen of Tulare, CA., Margaret (Jim) Cleveland of Kimball, NE., and Steven (Pilar) Petersen of Redondo Beach, CA; 17 grandchildren and 18 great grandchildren. She was preceded in death by her parents, husband and one sister.