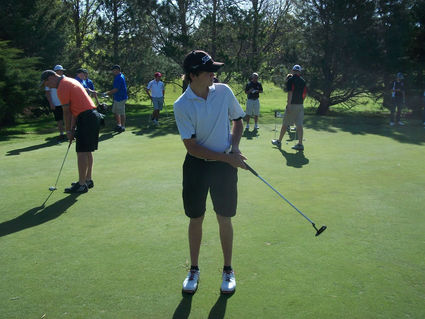 Jordan Greenwood, who qualified for the state golf tournament this past week by finishing in 5th place, practices his putting technique before the district tournament.

Kimball will have two Class C state qualifiers for the upcoming Nebraska Boys' State Golf Tournament in senior Henry Heeg and freshman Jordan Greenwood after both finished in the top ten medal group of the C-5 District Tournament held at the Kimball Four Winds Golf Course on Monday.

Heeg will be making his fourth consecutive trip to the state tournament after blistering the Four Winds Course with a best ever competitive round of 36-33=69 to win the individual championship by 7 strokes over the runnerup finish of Coleman of Valentine who shot 76. Greenwood now has the opportunity to also be...