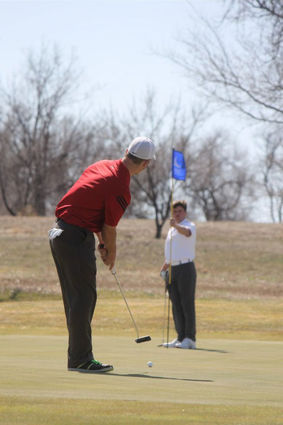 Henry Heeg sinks a put at the Bayard tournament.

Kimball's Henry Heeg opened his senior golf season with an individual win at the Bayard Tournament shooting a 77 to finish one stroke better than Bayard's Trae Blanco and three strokes better than Bayard's Roman Konvicka, both playing on their home course. It was a big win for Heeg as he has had limited time to prepare for the golf season as he was a starter and member of the Kimball High boy's basketball team that made it into the state tournament delaying their start to the spring sports season.

A 6th place finish wasn't all that bad considering Heeg was playing with three freshmen who were experiencing their first ever high school golf tournament. Michael Ferguson a returning junior letterman for Kimball, started play but had to withdraw in order to keep a departure time for a trip with the school's FFA class to the state FFA convention in Lincoln. Kimball's other golfers and their scores saw Jordan Greenwood shoot 96, Kyle Spicer 109, and Spencer Shields 133. Kimball coach Chad Wise said his freshman players were showing signs of nervousness and the pressure of playing in their first high school tournament, but expects all three to show improvement as they become more comfortable with tournament play. The return of Ferguson will also help out team wise.

The second tournament of the young season for the Kimball High boys was at Mitchell this past Tuesday, and today (Thursday) they are back in action at Bridgeport with a 9 a.m. start time weather permitting. Next Tuesday, April 22, they are at Morrill fOr another 9 a.m. start.

Coach Wise said his five member team has been working hard in practice although lots of other school activities have taken a toll on practice time, but said his younger players are showing improvement and he looks for their scores to improve.