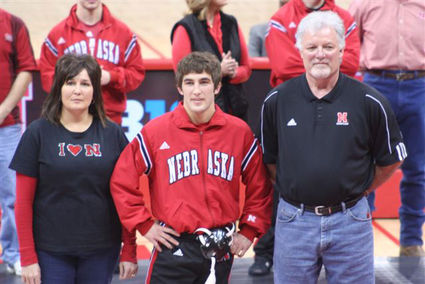 Shawn Nagel flanked by devoted parents Corrie and Bob Nagel at Senior Parents Night for the University of Nebraska Wrestlers. The Nagels travelled to almost all of Shawn's matches during his illustrious career.

The wrestling career for Kimball's most decorated wrestler ever is winding down, and what a career it has been. It all started back in Federation wrestling when Shawn was just a little bitty guy, and although he never got real big in stature, his accomplishments certainly did! Shawn almost re-wrote the record books at Kimball High including three state championships before accepting a scholarship to wrestle at a Division One level for the University of Nebraska where he was a four year varsity wrestler for the Corn Huskers. This feat alone is something no other Kimball High grad can match,...