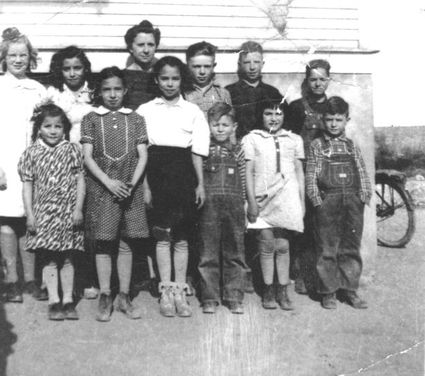 Carmen Perkins (front row, left side), is pictured above with one of her early school classes as a child.

After 33 years serving as a teacher in Canada, Australia, Mexico, and five of the U.S. states including Alaska, local resident Carmen Perkins feels she finally knows what leads to making sure that students are successful in the classroom.

"I wanted to find out just what it was, the common denominator for learning in children. It's very simple: love and discipline. They thrived on it," Perkins said.

Perkins, who was born in Kimball in 1935, spent the early years of her life as a migrant worker in Kimball County with her family.

"We worked in the fields and there were 14 of us. I was down at the bottom so all I had to do was shake the potatoes off the vines. We used to follow the harvest, but we always went to school a month later because of the potatoes, and we got out of school a month early," Perkins said.

In her childhood years, she attended the old country school west of the city of Kimball. According to Perkins, almost immediately, she knew what she wanted to be when she grew up after observing her teachers.

After leaving Kimball at the age of 14 to move with her family to Sidney for her father's work, Perkins attended St. Patrick's, a catholic school, where she studied alongside Jack Schadegg and Dick Cabela.

The war was on, and the depot was opening up so that's where we went. I went to a catholic school, St. Patrick's, and I sat right between Jack and Dick. They used to take my English papers. We're good friends still. Of course, Jack's gone, but Dick and I are still good friends," Perkins said.

After graduating from St. Patrick's, Perkins went on to earn her B. A. degree from Usuline College in Louisville, Kentucky, later receiving a Master's Degree in Education from the Eastern Oregon College of Education in 1970.

Throughout her extensive career which started in 1957, Perkins was a guest speaker for hundreds of schools and gave workshops to first year teachers and even wrote a book entitled, 'The Four P's of Classroom Discipline and Management'. Her efforts and commitment to education did not go unnoticed by her superiors. She received the Oregon Teacher of the Year Award for her work as a fifth grade teacher at the Middle School in Woodburn, Oregon.

After receiving another teacher of the year award years later, Perkins finally declined the award a third time.

"I had teacher of the year again, but I declined because it was the third one so I got runner-up. I gave the runner up my position,"Perkins said.

Perkins has also used her expertise in supervising younger teachers throughout her career, putting emphasis on discipline and organization.

"I recall one time I was supervising first grade teachers about 20 years ago. I had this young teacher, and I was trying to help her manage her discipline through organization. I said to her, 'You know, they'll copy you, because you're their teacher. And their desks are full of wadded papers and clutter, because that's the classroom you give them,'" Perkins said.

After talking to the teacher about the clutter five separate times, Perkins took matters into her own hands and stock piled all of the trash from the drawers and desks in the middle of the classroom in order to force the teacher to get her classroom in order. A fact that Perkins admits she is not quite proud of, but that finally yielded the needed results.

"When she came in, I said, 'By 4 o'clock today.' And I walked out. There were about three or four teachers in their helping her put things in order. She was so proud at the end of the day, because she had a new classroom. And that's what it's all about," Perkins said.

During her career, Perkins also raised a family consisting of 10 boys and one girl, which were born in sets of threes, according to Perkins. Though most people would find the dual responsibilities of teaching and raising such a large family at the same time, Perkins states that a lot of her teaching principles really came from observing her children and figuring out the different way each of them was able to understand instruction.

"I learned from them. I would give instructions when I would go to teach. I would come home and the two older ones had it down, every little thing to the letter, and I had one son where nothing was ever done. He was not a visual learner. He was an auditory learner. If I would give him instructions verbally, everything was fine. But if I would write something and leave it on his bed or something, nothing was done," Perkins said.

With interacting and trying to help each of her children with their school work, Perkins discovered several more methods that she could apply to her own teaching style in order to reach more children and help them be successful.

"I really concentrated on it. When Philip was having some difficulties in the second grade learning his alphabet, I had my hand on his shoulder one night, and I showed him how to write the alphabet by writing it on his shoulder while speaking the letters. That was the physical learning, and it added to my concept of how children learn," Perkins said.

Perkins also used her own writing as an educational tool for her children, penning individualized stories for them pertaining to problems that they were having.

"Whenever one of my sons had a problem, I would write them a little story, and then we would sit down and read it together. It always worked. But my books are only written for my kids. The characters in them are my sons, my daughter, my grandchildren and great-grandchildren," Perkins said.

Through working with her children and observing children in classrooms all over the world, Perkins has also seen how cultural background can inform a students' behavior and success in the classroom, stating that she observed a much more respectful atmosphere in other countries than she observed in the states.

"They had homes with a father and a mother and love and their teachers, next to their parents, were their love. They had mothers who doted them at home, and fathers that disciplined. You did not disrespect a teacher, and here there is no respect. You might find a little, but even then it's in the lower grades," Perkins said.

Since retiring from being a teacher in 1991, Perkins has observed the changes in the classroom in recent years, finding them to be a step in the wrong direction as far as child development is concerned.

"My colleagues and I used to stand by our doors and greet the children as they came in, and we would professionally dress. Never were we in there looking like a field worker. It was an honor to be a teacher at that time. I don't know that it is now other than a paycheck," Perkins said. " I wouldn't want to walk into a bank and watch my banker to come out in torn shirts and jeans. Why should children go into the classroom and see casual dress."

It is not only the casual atmosphere of modern classrooms that Perkins finds bothersome, but also the effect the technological age has had on student/teacher interaction.

"I have to consider the times and all of the tools that they have so there's really not much a teacher can do but walk them to the computer and walk them to this place and to that place, they don't teach," Perkins said.

Along with an aspect of love and discipline that comes with the responsibility of being a teacher, Perkins feels that their is also a spiritual aspect to the classroom that teachers need to take time to tap into.

"We all have a specific talent within us that's just wanting to come out, and that spirit is the spirit of God. When I looked at my classroom, I saw little gods with high potentials. Not that they would take the place of the creator, but they had the makeup, the ability, and if it was just nourished, they could do great things," Perkins said.

Perkins also believes that the approach of newer teachers might be slightly misguided through attempts to be students' friend.

"One thing I learned early is that I'm not their friend. What they want is a teacher. So many teachers, and i'm not talking about anyone specific, want to be their friend. They think that if they are their friends, they can accomplish more with the child. The thing of it is, you're the teacher, find that spot in them that they can nourish and grow with and everything else. And God brings it all together," Perkins said.

However, Perkins, who moved back to Kimball in 2003 after the death of her beloved husband of 19 years Hugh Perkins, acknowledges that the times change, and we change with them. For now, she's content with reflecting on her time in the classroom and the joy that it brought to her life.

"I had my day, and I had my time. Things were perfect at that time as far as I could see. And I loved teaching. I loved being with children," Perkins said.