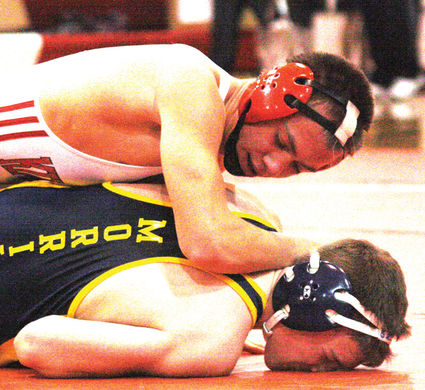 Only five of the team’s seven athletes were eligible for last week’s home triangular against Morrill and Mitchell and the Longhorns dropped four of their first five matches.

At the Southeast Invite in Yoder, Wyoming, however, Kimball’s wrestler’s blitzed through the field.

“The kids are doing doing fundamentals and outworking everybody,” the coach explained.

“We showed we’re there to wrestle,” echoed Tatum Morgan, who finished 2-1 and took third at 126. The turnaround in fortunes, he added, “feels amazing.”

Morgan might have won his class, as well, but for an unfortunate misstep. Up 14 to 4 in the semi-final match against Jacob Johnston of Laramie with just over 1:00 remaining, he appeared certain to gain a decision.

“I had the kid on his back,” he reported. “But I made the worst move possible.”

Withrow is unscathed on the season. At the Kimball triangular he bested Morrill’s Garrett Zwiebel in an almost cerebral match, earning a take down in the final moments of the third period. He then challenged Tanner Whitton of Mitchell in a more frantic, physical encounter, pinning his opponent in the final frame.

At the Southeast Invite he captured his first two matches by fall. In the title round, he earned a 13-6 decision over Douglas’ Landon Utter.

He is now 5-0 with a tournament championship to his credit. His Yoder win was particularly important, as he fell in the championship round a year ago to register his first loss.

Keller dropped his season opener to C.J. Sidrow from Morrill after a long and hard fought escape left him bloodied and a move toward his opponent’s legs in the third went awry. He is undefeated since, standing at 4-1.

“It feels good,” he reported after his first win. “I had some mistakes, but I’ll fix them.”

He won all three matches at Southeast by fall.

Tristan Carruthers finished second in the 160 weight class at Yoder, winning two by fall, one through forfeit before losing to Joseph Romero from Cheyenne South. The effort improved his record to 3-3 after a difficult foray in Kimball.

“Tristan was capable of winning both,” Brashear said after the Kimball triangular. “He started with the right things, he just needs to continue.”

Perhaps the most dynamic performances of the young season have been turned in by Justin Mohr. The sophomore lost to Alex Knouge of Morrill in the opener but quickly rebounded. Facing Mitchell’s Cody Mueller, Mohr worked for a pin in the second period. Mueller held his bridge until time expired. In the third he defended everything thrown at him until gaining the advantage over his foe and winning by pin.

“It felt really, really good,” Mohr said afterward. “I watched him against Morrill. I knew if I got him down, he was mine.”

At Southeast he opened with an 11-7 decision over Tyler Picard from Douglas then fell to Cheyenne South’s Cody Smiley.

“I wasn’t quite as aggressive as I needed to be,” Mohr admitted.

He fought back through the other bracket, however, knocking off Marty Holt (Douglas) and Micah Swann (Cheyenne South) by fall before claiming a tight decision over Laramie’s Will Kozlowski to place.

Kimball travels to the Banner County tournament on Saturday.

“It was good to get a taste of success,” Brashear observed after the Southeast event. “The tournaments will get tougher, but we will keep progressing, too.”