Point At The Steak 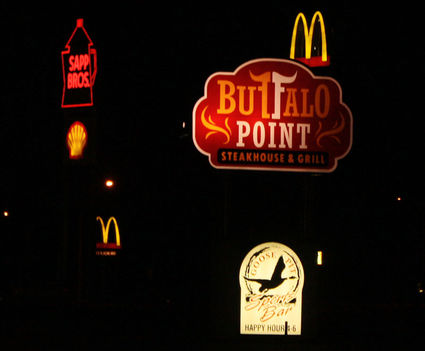 Buffalo Point is a highlight in the logo clutter along I-80.

Why do we love steak so much?

The flavor is rather basic, when you think about it—just a husky, meaty and familiar heft. Yet douse it with sauce and you obliterate its very essence. Order one from a lean cut and that vaunted savor likewise disappears. Steaks are also temperamental things. They wither into shoe leather under too much heat.

Still, there’s something about a thick, glistening, cushy filet.

At Buffalo Point in Sidney, they sometimes play loose with rare orders. At least mine was allowed to slip into the netherworld between rare and medium rare—although by such a narrow margin the cut revealed enough silky magenta-hued meat to quiet any initial concern. And although the center was warm, the fibers eased away casually.

To the kitchen’s credit, line cooks allowed the simple flavor of meat to stride forward. They use only a sprinkling of salt and pepper while tracing the surface with just enough char to add a bittersweet crackle.

Try it with their chips: wafers of potato fried to a motley golden brown and tossed with a tantalizing pinch of salt. They are sheer and crisp, without the oily sheen or sodden weight that plagues house made versions elsewhere.

Besides, you’ll be sorry if you opt for mashed potatoes instead…unless, that is, you prefer a thin, characterless mound draped in suspicious brown sauce stubbornly unwilling to help out the situation.

Sorry, but there’s no excuse for mediocre mashed potatoes.

In contrast to so many other restaurants, Buffalo Point selects narrow onion rings. These are a satisfying mashed potato substitute, as well—particularly for their malty outer crunch countering the slightly sweet strands inside. And if you order steak, it comes with an earthy, gritty succotash sliced with razors of sharp onion over which hovers the natural sugar of corn slivered from the cob.

Good succotash is, in my opinion, an undervalued, underused side.

Clearly there are peaks and valleys on the restaurant’s menu. The fish in their fish and chips plate, for instance, presents a beautiful crisp shell and (on a recent visit) flesh so soggy it separated completely from the crust, leaving large air pockets. The appetizer menu seems pedestrian, at best. The burger list, on the other hand, includes scaled up patties and buffalo meat.

It is Buffalo Point, after all.

And maybe that’s why we love steak. It makes you forget about the valleys.